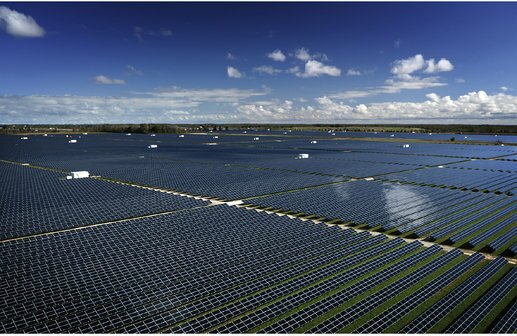 At 97 MWp, the PV power plant with the highest output worldwide today: The Sarnia Solar Project in the Canadian state of Ontario

In September 2010, the "Sarnia Photovoltaic Power Plant" was installed in the Canadian Federal State of Ontario.

Around 1.3 million thin-film modules generate a capacity of 97 megawatts (MW), making it the most powerful large-scale PV plant in the world at this point in time. The Canadian solar park is number one in a range of large-scale projects implemented in the second half of 2010. In Italy, the 84 MW power plant in Monalto di Castro and the 71 MW solar park in San Bellino were built, while in Germany, Finsterwalde I,II,III boasts an output of 80 MW.

Solar plants are increasingly moving into wider ranges. According to a survey carried out by the internet service pvresources.com, solar parks with an output of 500 kilowatt peak (kWp) or more contributed 3.5 gigawatt peak (GWp) of solar power – of which 2.8 GWp was in Europe – to the world’s public grids in 2010. In total, the newly installed capacity of photovoltaic energy worldwide was around 16,000 megawatt peak (MWp).

There are a variety of reasons for the importance of large photovoltaic plants. Rising efficiency levels of solar cellsLarge-scale PV power plants (> 500 kWp):annual power capacity (MWp)as share of total market made with crystalline wafers, as well as those of large-area thin-film modules, have contributed to costs dropping at an impressive rate: In 2009, the prices for modules and cells plummeted by one third, and in 2010 by as much as 20% again. Module prices are expected to drop by another third worldwide by 2012. Ex works prices for inverters, which, according to IMS Research, a global market research company for the electronics industry, fell by 11% in 2010, also boosted the worldwide photovoltaics boom. Finally, the rising prices of fossil fuels have been making solar parks increasingly lucrative for financially strong investors.2010Sources: Denis Lenardic, pvresources.com/EPIA20062007200820092010The world’s largest PV power plants (> 500 kWp, as of May 2011)

Project planning and management, installation and the operation of large PV power plants present new challenges for planners, investors and bankers alike. The larger the plant, the more likely it will be that the economic viability of the project, rather than the client’s credit standing, will determine whether the bank will grant funding.

Precise analyses of the technical, financial, fiscal and legal details can make or break a project, especially for plants from approximately 400 kWp upward, which require an investment of at least one million Euro.

Quality assurance, standardization and location-specific plant layout are indispensable if the project is to be financially feasible and generate sufficient yield in the course of its twenty-year life span.

Grid integration presents a particular challenge. Large photovoltaic plants usually feed into the medium voltage grid, though making feed-in points accessible may incur considerable costs. In Germany, the Medium Voltage Directive of the BDEW (German Association of Energy and Water Industries) contains special rules on how inverters should function. For instance, it must be possible for grid operators to control them in order to disconnect the plant in the event of grid fluctuations.

In 2010, the German government made drastic cuts to the feed-in tariff. Moreover, further cuts in the feed-in tariff, which had been planned for 2012, are to be brought forward to mid 2011. In other European countries such as Italy, France, the UK and Spain, governments have recently also made considerable cuts to feed-in tariffs for solar power from large-scale projects.

Triggered by events in the Fukushima nuclear power plant, however, many countries are readjusting their energy policy in favor of renewable energy sources. But even without these additional positive stimuli, demand is growing – particularly in Asia and the US. The continued fall in the cost of modules and installation is also contributing to reducing the price of solar energy.

Finsterwalde I, II, III solar park in the German state of Brandenburg with a total output of 80 MW

In regions with strong insolation such as Spain, the Middle East and North Africa, the Southern states of the US, India and parts of China, modern solar modules are already able to produce electricity at a price lower than conventional sources – solar power has reached grid parity. Even in Germany, by the end of 2012 at the latest, the feed-in tariffs for solar power will be lower than the price consumers pay for electricity from the public grid. In order to be competitive in the power generation market, the costs will certainly have to drop even further.